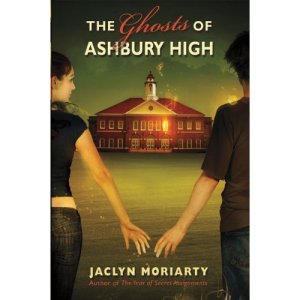 I'm not crazy about the cover, but I do prefer this title

I have a thing for Australian YA authors: Melina Marchetta, John Marsden, Steven Herrick, Shaun Tan (not strictly YA), and of course, Jaclyn Moriarty. It must be something in the water. Moriarty’s latest book, The Ghosts of Ashbury High, is the second novel I’ve read recently that is among the most anticipated books of the upcoming season, and it is yet another home run! Two for two! This makes for an excellent spring. Why would you bother reading in any other genre?

This is the fourth (if you include Feeling Sorry for Celia) in a loose series of books based on the lives of a group of Australian teeagers.  It began with the charming The Year of Secret Assignments (originally published in Australia as Finding Cassie Crazy)*, in which Cassie, Em and Lyd, students at the prestigious private school Ashbury High, are paired up with male pen pals from the less-exclusive Brookfield. Hilarity and romance ensues. This was followed by The Murder of Bindy Mackenzie (also published as Becoming Bindy Mackenzie and The Betrayal of Bindy Mackenzie), in which there is a plot against school superstar Bindy Mackenzie. Now the girls (and friends) are in their final year and find themselves dealing with ghosts: figurative ghosts, literary ghosts, and perhaps, a real, live (hmm, poor word choice) ghost. The idea of ghosts and everything the word implies turns out to be an excellent theme around which to create a complex and engaging novel.

Moriarty’s style is unique, at least it was when Feeling Sorry for Celia was first published in 2000.  In the Ashbury/Brookfield books, the novels are written as an assortment of atypical narrative forms. For example, Ghosts consists of minutes from staff meetings, blog posts, letters, poems, and English assignments (ie: write the story of term two as a ghost story). This format accomplishes a number of things. It creates excellent supsense, as the reader is always bouncing around from one perspective to another. The format appeals to readers who balk at long novels but feel at ease with shorter sections in non-threatening formats (IMing, emails, blog posts). There are deliberate holes in the plot that require some (curriculum word alert!) inferencing on the part of the reader, but not in a way that feels like a chore (read: educational). Other authors have used a similar narrative style since (and probably prior to) Celia, but I can’t think of a single one who carries it off as succesfully as Moriarty.

My favourite thing about Jaclyn Moriarty is her uncanny ability to capture the voice of not just one, but many teenage characters. Reading her novels almost feels voyeuristic, as if I have actually stumbled upon the correspondence of real people. She effortlessly slips into the slang, malapropisms, and general ennui of the modern teenager. I am particularly fond of Em, with all of her good intentions, dramatics, and genuine anxiety about her future.

It takes a while for Ghosts to get going, but once I hit the half-way point it was impossible to put the book down. It is hysterically funny, heartbreaking, and chilling. I was particularly floored by the genius ending, of which I will give nothing away, except to tell you that there are twists and surprises right up to the last few pages. There are lots of great reader reviews out there, as it was released under the title Dreaming of Amelia in Australia and New Zealand in the fall of 2009. Personally, I think The Ghosts of Ashbury High is a much better title. It connects the themes and characters in the book far more than Dreaming of Amelia, which mistakenly implies that Amelia is the central focus of the novel. Still. Whatever it’s called, it’s a fantastic read.

The Ghosts of Ashbury High will be available in Canada and the USA from Arthur A. Levine books, an imprint of Scholastic, in June 2010.

*Moriarty is one of those authors whose books are constantly being retitled when published in North America or the UK. I like the North American titles best, but perhaps this is just a sign of smart North American marketers knowing what will appeal to me, a North American reader.