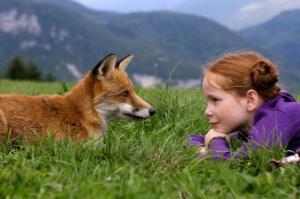 So much more fantastic than that *other* Mr. Fox...

I know this is not a book, but I was so charmed by this French children’s film that I wanted to give it a shout-out. The English version is narrated by Kate Winslet, whose soothing, nuanced voice is a perfect complement to the visuals. There is absolutely nothing lost in translation here. A young, fox-haired girl catches a magical, unexpected glimpse of a young fox and is forever enchanted by it. What follows is a unique and tentative friendship between child and fox.

There is some seriously beautiful cinematography in this film. There is such attention paid to the forest and the animals that at times, I felt like I was watching a nature documentary. Although I would say it is a quiet film, meaning there isn’t alot of drama or conventional action, there are adventurous scenes in the woods and in caves that provide excitement and suspense.  There are some scary scenes for very little ones, so I would suggest a viewing age of maybe 8 and up.

What I loved the most about this film is the sense of enchantment that is created around the natural world. Director Luc Jacquet has said that the movie is based on a childhood experience, one that has clearly affected him deeply.  It made me think of all the articles I’ve read and theories that have been presented at conferences on children and the environment about how the wild is the perfect place for children to mature and develop. The little girl in this film shows remarkable determination, patience, and resourcefulness, skills she has learned from spending hours alone in the woods. Her experience also allows her to mature emotionally. At first, the girl sets out to tame the fox, a common childish desire. By the end of the film, the narrator admits that she has “confused posession with love,” and after an eye-opening (and heartwrenching) incident, she is able to let go of her desire to tame or own the fox, but she is reassured that her fox “has known love.”