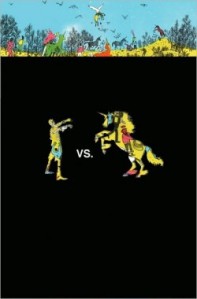 This title alone will set many hearts a-flutter...

Prepare for an epic literary showdown! Zombies vs Unicorns was just the thing I needed to snap me out of my reader’s ennui:* Funny, refreshing, and irreverent. The book rests on the friendly feud that editors Holly Black and Justine Larbalestier have been having via their personal blogs about what is more awesome, zombies or unicorns. Enter Margaret K. McElderry books and voila- hot new book! Black (Team Unicorn) and Larbalestier (Team Zombie) argue their cases via short fiction written by teams of hot YA authors. There are quite a few short fiction compilations out there that despite having high profile authors don’t seem to really catch on with teens. I am quite confident that this one will.

Each short story is introduced by the friendly banter of Black and Larbalestier, who provide all sorts of juicy tidbits on the mythology, lore, and history (pop cultural and otherwise) of their chosen subjects. These intros are fun, full of personality, and just the right amount of snark. I enjoyed the intros just as much as the fiction. The stories themselves are varied in tone and style and reflect the range of writers.

I must admit, at first, I was worried for Team Unicorn. How can a species so shining, docile and pure compete with the logic-defying mass appeal of zombies? But the unicorns in this book not your typical breed. They are at times conniving, smart-talking, blood-thirsty creatures who avenge wrongful deaths, roam the streets of New York talking to misguided teens, and strike fear and awe in the hearts of the teens who run into them. Final verdict? Don’t underestimate a unicorn.

As for Team Zombie, Larbalestier and crew clearly have the upper hand. I am in no way a zombie expert; although I do know it appears to be a popular fascination that won’t die (Ha! Zombie Pun!) This selection of zombie tales provides a good introduction to the genre for those blissfully unaware of the living dead, but also provides new insights for the all the zombie fanatics out there. There are gay zombies, pirate zombies, zombies in love with humans, humans in love with zombies, child zombies adopted by Angelina Jolie-type celebrities, you name it.

Reading this book is like gaining exclusive access to a super-cool club of YA authors and personalities: Holly Black, Meg Cabot, Garth Nix, Naomi Novik, Libba Bray, Cassandra Clare, Maureen Johnson, Carrie Ryan, Scott Westerfeld, Alaya Dawn, Justine Larbalestier, Kathleen Duey, Margo Lanagan and Diana Peterfreund. This is a list anyone who is ANYONE in YA wants to be included on. They are the beyond-cool kids at the party wearing t-shirts with the name of a band you’ve never heard of splashed all over the front laughing at something so urbane and witty you can’t possibly hope to understand, but you just want to be included in the joke anyway.

Final verdict? Sorry, Team Unicorn, my money’s on the zombies.

Zombies vs. Unicorns will be available in hard cover from Margaret K. McElderry Books on September 21, 2010.

*There are only so many supernatural romances, post-apocalyptic or my (insert sibling here) is dead books a girl can handle.