On the fourth day of Christmas, my true love read to me, this fractured fairytale! 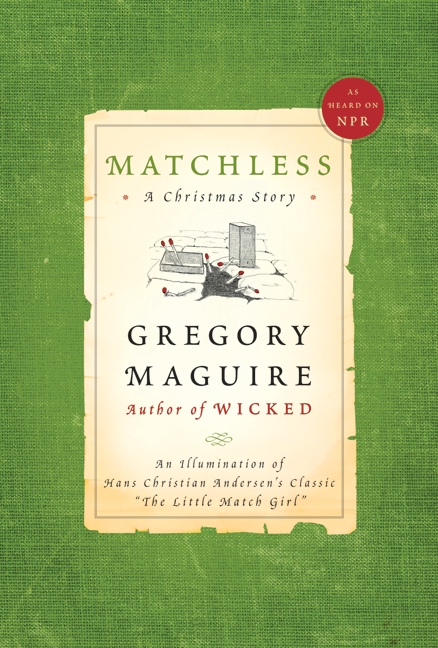 When most people think of The Little Match Girl, they think of a child starving to death outside alone while she looks in on other people’s holiday feasts*. Not the most Christmas-y of stories, and definitely one of Hans Christian Anderson’s bleaker tales.  But Gregory Maguire  manages to work his own special brand of storyteller’s alchemy with this source material to create a touching, magical and beautiful Christmas story that stays true to it’s roots, but also speaks to all those Christmas-y themes we want to read about come December.

The story is divided into four parts. In part one, we are introduced to young Frederick, who lives with his mother, a poor seamstress who gets called away on Christmas eve to tend to the Queen’s unruly hemlines. Part two tells the story of the little match girl, fairly unchanged, and in part three and four the stories converge and combine. Maguire’s touch is light, and he deftly manages the grief of the little match girl’s death and draws the reader’s attention to the hope, love, and good fortune her death inspires in the lives of those she left behind.

Matchless is a fantastic read-aloud, which is not surprising since it began life as a story meant to be read on National Public Radio. But the good people at William Morrow have since combined forces to create a beautifully designed book. The pages are bordered and the text is generously spread out, making good use of white space. Maguire has drawn his own spot illustrations, which are as spare and whimsical as the text. That Maguire can create such a heart-warming, magical tale of love and hope out of the The Little Match Girl is a miracle itself. It is truly a treasure to be shared.

*I have always loved The Little Match Girl, though I do tend to love tragic or poignant stories.

2 thoughts on “The Twelve Books of Christmas: Matchless”