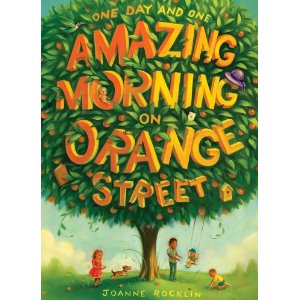 The Magic Childhood Space is a common subject (or setting) of children’s books. These spaces can take the form of treehouses (The Odds Get Even), forts (The Egypt Game), re-named natural spaces (Lake of Shining Waters, anyone?), and plots of land transformed by imagination and play (Roxaboxen). In this case, The Magic Childhood Space is an overgrown lot on a street in Los Angeles that was never developed, at the centre of which is the most perfect valencia orange tree one could imagine. The lot plays host to meetings of the Girls With Long Hair club, buried treasures, family secrets, and many other juicy tidbits.

I like a strong ensemble cast, and there are plenty of characters to love in Joanne Rocklin’s book. Bunny, who has decided to change her name to the more sophisticated Bonita, is anxious about her mother, who is traveling by plane. Clever and creative Ali is worried about her little brother Edgar, who has not been himself since a major operation. Robert is a little in love with Ali and hopes to capture her attention, as well as his Dad’s, with a newfound magic trick. Bossy Leandra is not looking forward to the arrival of her new baby sister. And then there is Ms. Snoops, she of the delicious ambrosia and shiny pink tracksuits, who is full of stories from the old days on Orange Street, but can’t seem to remember what happened yesterday.

The timeframe of this book, as suggested in the title, is less than 48 hours, though the author uses flashbacks and memories to fill in some necessary blanks. This format keeps the book rolling along at a nice pace. Although there were moments when I wished I could spend more time in a particular character’s head, the story is in no way underdeveloped or superficial. Like the perfect orange, the book is neither too sweet nor too tart. Fans of The Penderwicks, What Happened on Fox Street, and the Melendy Quartet will gobble this one up.

One Day and One Amazing Morning on Orange Street will be available in hard cover from Amulet Books in April.

3 thoughts on “Magic Childhood Spaces: One Day and One Amazing Morning on Orange Street”