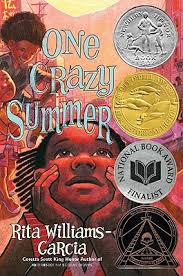 You can barely see the cover of this book underneath all of those award stickers. One Crazy Summer has won or been given the honour book status for almost every award it was eligible for, and with good reason. Rita Williams-Garcia has blended a unique history lesson with a family story and delivered it all in the pitch-perfect voice of her eleven year old narrator, Delphine.

1968. Delphine lives with her Daddy and Grandmother, Big Ma, in New York. Ever since her mother Cecile took off to be a poet, she has taken care of her sisters, Vonetta (all show and crow) and Fern (always accompnaied by her doll, Miss Patty Cake). She is none to pleased to be spending the summer with crazy Cecile in Oakland, especially when it is clear that Cecile can’t be bothered speaking to her own children, let alone feeding or entertaining them. Instead, the girls spend their days at a community centre run by members of the Black Panthers, learning about their rights. But even after weeks of self sufficiency and good behaviour, Cecile, who goes by Nzila now, does not seem to be warming to her daughters. Why are the girls not allowed in her kitchen? Who are the people coming and going at all hours of the day?

I love Delphine- responsible, no-nonsense, lovable Delphine. Her voice is so real to me that days after finishing the novel I can still hear it in my head. Part of what makes her so memorable is her cadence and diction, which is child-like but also artfully crafted. It reminded me a bit of Salamanca in Walk Two Moons, who remains one of my all-time favourite narrators in children’s lit. Both Delphine and Salamanca are quintessential middle grade characters, teetering at the edge of childish naivete and yet also wise-beyond-their-years.

Williams-Garcia manages to address hard, emotional material (absentee mother, racism, the volatile civil rights movement in the late 1960s) in a way that is neither threatening nor heavy-handed. Her message is not political, though there are lots of things to be learned about the politics of the day. Readers will be fascinated to learn about the civil rights movement and the Black Panthers, and skeptical Delphine is the perfect guide for this territory, which is probably unfamiliar to many Canadian children.

One Crazy Summer is available now in hardcover from Amistad, an imprint of HarperCollins.