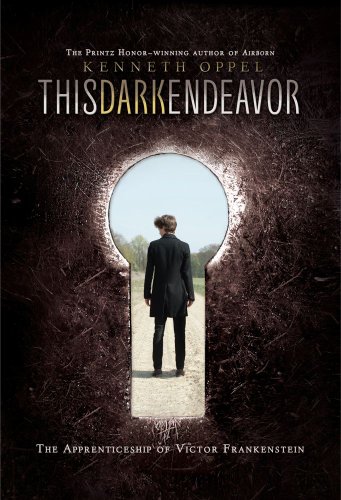 Identical twins Victor and Konrad Frankenstein spend most of their days sailing, fencing, and laughing with their fiesty cousin Elizabeth and their witty, bookish friend, Henry. But when Konrad falls ill, and no doctor can figure out the cause or a cure, Victor takes matters into his own hands. He believes the cure lies in one of the ancient texts in the Dark Library, a mysterious library full of unusual books hidden deep within the Frankenstein chateaux. With the help of Mr. Polodori, a blacklisted alchemist, Viktor, Henry and Elizabeth set off on three dangerous and increasingly horrifying quests to obtain the ingredients necessary to make the Elixir of Life and save Konrad. But as the tasks get more difficult and Victor’s jealousy of Konrad deepens, he starts to wonder if the Elixir of Life is the answer he’s been looking for.

Picking up a Kenneth Oppel book is always the right choice. At this point in his illustrious (and, in Canada, unmatched) career, it is no surprise that Oppel is a master of pace. He knows when to use a cliffhanger, when to wield a plot twist, and when to linger over a sentence. His writing is never superfluous: there is no time lost nor word wasted in his novels. This is definitely true of The Dark Endeavour, which I devoured in record time.

I enjoyed the setting, 18th century Geneva, which Oppel portrays as a golden era of enlightenment and liberalism. While the setting and time period were clear in my mind, Oppel deftly avoids the exposition and dense language that can sometimes clog the storytelling in historical fiction. There are wonderful parallels drawn between science and magic and faith and magic, which allows Oppel to have some fun with the more supernatural or inventive parts of the story. Perhaps my favourite invention was the Wolf’s Vision, a potion that when applied directly to the eyes allows the user to see the world as a wolf does. In a clever and heady scene, it is with his Wolf Vision that Victor first realizes his lust for Elizabeth.

This Dark Endeavour is definitely the sexiest and therefore most teen of Oppel’s books. A great deal of the tension and conflict rests on a love triangle between Victor, Elizabeth (Oppel is careful to remind the reader that she is a DISTANT cousin), and Konrad. Konrad is the good son: affable, charming, kind. He is the twin who has won Elizabeth’s heart. Victor is the passionate son, who is often rash and given to bouts of jealousy. Despite creating these distinctions, Oppel is careful not to dwell on them, and therefore avoids creating flat, two dimensional characters.

This combination of compelling love triangle and supernatural elements is perhaps what attracted the attention of the producers of Twilight, who have already purchased the film rights. So far, the production boasts director Matt Reeves (Let Me In, Cloverfield) and writer Jacob Aaron Estes (Mean Creek), which you can read more about here.

There has been a lot of hoopla lately over an inflammatory article in The Wall Street Journal bemoaning the dark state of YA*. Among other things, it refers to a vast range of books (from dystopian fantasy to contemporary realistic fiction) as too dark and “depraved.” In Canada, a similar (though more measured and far less concerned) article came out the following week in The National Post (which oddly did not reference the WSJ article, despite discussing similar issues and even relying on some of the same books).

I don’t really have much to say on this issue that hasn’t been said by hundreds of other people, although  I expressed my feelings on this and other things YA on a recent Fresh Air Panel on CBC, along with Toronto Public Library’s Cameron Ray and Evan Munday. You can hear our thoughts on this (and some great summer reads!) here:

The fact is, every few years a similar article surfaces, inevitably resulting in an outpouring of support from writers, librarians, and the YA community. This time around, search under the hashtag #YAsaves and get ready to be inspired. Questions of censorship and what is appropriate will always plague the children’s literature and YA community. Every book has a reader, and it is the lucky job of those of us who work in this industry to make sure each book finds the perfect audience. In the case of This Dark Endeavour, it will be enjoyed by boys and girls, particularly those with a fondness for adventure and speculative fiction, ages 12+.

The Dark Endeavour will be available in hard cover from HarperCollins Canada in August.

*If you must, you can read it here. Be warned that this piece reads like an op-ed written by Nancy Grace.

*And here’s the much more well-rounded, journalistic article from The National Post.

2 thoughts on “Dark in all the Right Places: This Dark Endeavour”