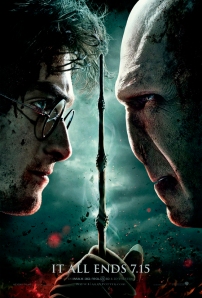 Tonight is THE END! I’ve got my tickets to a double bill, part 1 & 2, I’ve got my Gryffindor shirt AND scarf, and most importantly, I have lots of tissues and waterproof mascara on to see me through what everyone is saying is the best of the 8 films. 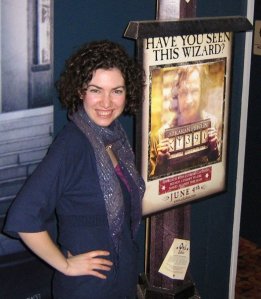 Me at the midnight screening of Goblet of Fire, although this promo poster is clearly from The Prisoner of Azkaban. . .

There has been a lot of discussion lately about the impact of Harry Potter. I took part in one such discussion on CBC radio earlier in the week, which got me thinking about how so much of the Harry Potter community is built online. Beyond the informative and exhaustive fan and info sites MuggleNet and Leaky Cauldron, there have been tons of creative ventures put forth by other Potterheads, enjoyed around the world by millions. Here is just a sampling of some of my favourites: 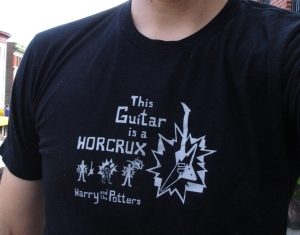 Just one of many clever Harry and the Potters band shirts

Harry and the Potters are one of the best literary tribute bands ever. I have seen them twice, once at the Vancouver Public Library, and more recently here in Toronto. I don’t know what is more entertaining, watching two Harry Potter lookalikes totally commit to songs like “Stick it to Dolores” or “Human Hosepipe,” or watching their rabid fans raise wands during the ballads. Seriously. Here is one of their classics, “Save Ginny Weasley From the Basilisk” (and then check out Save Ginny Weasley from Dean Thomas):

Considering the vast numbers of people who watch their videos, The Potter Puppet Pals need no introduction, but if you haven’t checked out their brand of simple genius, check out The Mysterious Ticking Noise. My favourite is probably Wizard Swears (as in, “your mother is a blast-ended skank” HA!), but you should start with this one first:

This was forwarded to me by another Potterhead a few days ago and I have been laughing ever since. One of the things Potterheads have never been able to wrap their heads around is what was J.K. Rowling thinking when she created Hufflepuff?! Poor Hufflepuff. Even Edward Cullen can’t save that reputation:

And this gem, which has been trending big time. Beyonce meets Harry Potter? Yes please. Favourite line: Accio that box of tissues.

So you see, we can rest assured that as long as the internet exists, there will be lots of Potter content to keep us happy. See you all in the theatres tonight!