A few years ago it seemed like every other picture book featured penguins, and why not? Penguins can be cute, funny, resourceful, family-oriented, quirky, survivors, or figures of environmental tragedy. Think of Tacky the Penguin, Oliver Jeffer’s Lost and Found, Karma Wilson’s Don’t Be Afraid, Little Pip and many other books featuring penguin protagonists. Thanks to movies like Happy Feet and March of the Penguins, you couldn’t help but see them everywhere.

Lately I feel like I’ve been seeing less penguins and more porcupines. I get it- porcupines, at least when rendered in children’s book illustration- are adorable. I mean look at that image of Pearl! So cute, so joyous! So perfect for picture books!  There is much fun to be had with the prickly/difficult to love aspect of the porcupine, and not being able to give or receive hugs is especially tragic to the under 6 set.

From Paul Schmid we have the adorable Hugs from Pearl, the protagonist featured above, soon to be followed by Percy’s Big Idea:

New Canadian Christmas classic A Porcupine in a Pine Tree by Helaine Becker replaces the stuffy old partridge of 12 Days of Christmas Lore with an almost cuddly looking porcupine, as rendered by Werner Zimmerman: 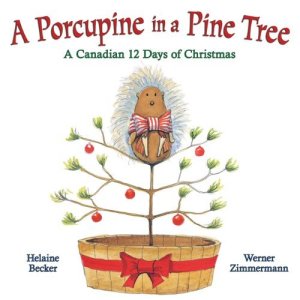 Mr. Prickles: A Quill-Fated Love Story (Kara LeReau and Scott Magoon) is the story of two porcupines who find love despite trials and tribulations (in the form of some mean-spirited woodland creatures) along the way:

All of these recent books owe much to the 1989 classic A Porcupine Named Fluffy, interestingly enough brought to you by Helen Lester and Lynn Munsinger, the same team who created the Tacky the Penguin books. Clearly this duo has a magical ability to create picture book trends:

And just in case you were concerned that the cute factor of porcupines was being misrepresented, here is a video of a young porcupine with the hiccups that will put your fears to rest. Why are animals infinitely more adorable when they have the hiccups?

5 thoughts on “Porcupines are the New Penguins: Picture Book Trend”