It’s hard to believe I am already at the half way mark of my book week tour! Today I stayed put in Prince Albert, stopping by Arthur Pechey School and the John M Cuelenaere Public Library, which has one of the nicest puppet theatres I have ever seen.

In addition to being home to The Diefenbaker House and some very keen readers and writers, I shall remember Prince Albert with great fondness as the place where I found Barbie: Holiday Helpers. I love book sales of all kinds, and library book sales are full of forgotten treasures. Check out this gem, from the Little Golden Book “Reporter Series” starring everyone’s favourite literary character, Barbie! 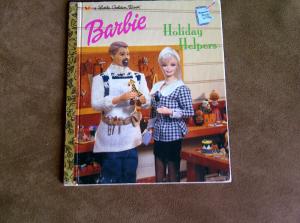 In this installment, intrepid TV reporter Barbie is on a ski vacation when her hat blows away. Barbie follows her hat to a cabin in the woods where she meets a nice carpenter named Peter Flanders who makes wooden toys for the ‘underprivileged kids’ in town. But alas, Peter’s old car won’t start and the children will go toyless this Christmas, until Barbie agrees to ski back to her car and drive Peter into town. Savvy Barbie knows a good story when she sees one, and decides to do a story on good ole Peter. Holiday cheer ensues.

Check out the plaid shirt on this production assistant (Midge?), prepping Peter for his TV debut: 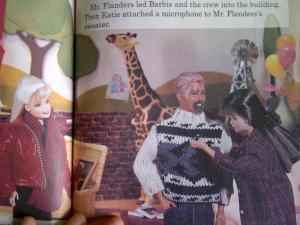 But most importantly, what is with that goatee on “Peter” (played by a barely disguised Ken)? Does this doll exist? Did Mattel make a Woodsy Ken? Or maybe it’s Lumberjack Ken? Or even better, did someone actually glue on that goatee and make that teeny tiny sweater for the sake of the book? Whatever the reason, bravo Golden Books! This is a souvenir to be treasured.

Number of bookmarks handed out: 186

Most philosophical question: If you could be any other person who would you be?

Me: If you think about it, every day ends in Y…birthday, holiday, Tuesday…

Young Einstein: I can think of a day that doesn’t end in Y.

Me: What day is that?

Foiled! Well done, Young Einstein! Tomorrow I bid Prince Albert adieu and head out to Nipawin and Tisdale, then back to Saskatoon. Tonight it’s leftover pizza, The Avengers, and to bed!