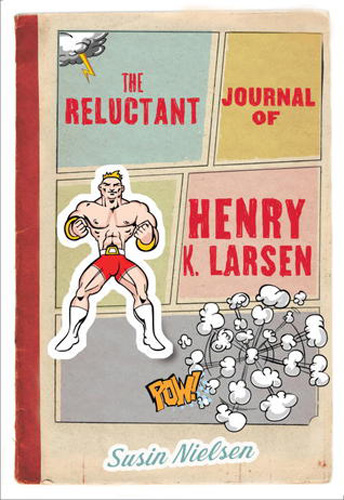 If you follow this blog you know that I love Susin Nielsen like Garfield loves Lasagna. You can read evidence of the love here and here. After reading Nielsen’s latest offering, I am happy to say my love is as deep as ever.

Henry and his father have moved into a sketchy apartment in Vancouver, leaving his mother in an institution in Ontario following a horrific event that claimed the life of his older brother and another student. In a new city, in a new school, Henry attempts to start fresh, leaving the nightmare of his brother’s actions behind him. His therapist has suggested he keep a journal. In it, Henry records his membership in the Reach for the Top team, burgeoning friendship with Farley, the King of Dorks, and his crush on the fearsome (but beautiful) Alberta (a person, not the province). As the events of that fateful event are revealed, we see glimpses of the pain, inner strength, and hope at the core of Henry K. Larsen.

Henry is my favourite protagonist yet. He manages to be sweet and vulnerable without being cloying or un-relatable. Sometimes I worry that male readers don’t gravitate towards sensitive male narrators, but that won’t be an issue here. Henry is too specific to be an “everykid” (thank goodness), but Nielsen has given him lots of traits and worries and interests that will endear him to a wide range of readers.

His grieving process is handled carefully. Henry has moments of anger, fear, regret, and deep sadness. This is not a book about grief, though it permeates every page. There are some harsh revelations, and I love how Nielsen never beats around the bush or alludes to things- she just goes for it.  This applies to “rude” jokes, violent bullying, or “unsavoury” language. There is no sugar-coating or avoidance. I appreciate this honesty and so will her young readers.

All this being said, this is one of the funniest middle grade books I’ve read all year. I don’t think Nielsen could NOT be funny if she tried (this is a compliment). In this country literary merit is not associated with humourous writing, at least not in children’s fiction. A quick look at the GG winners and finalists over the past decade demonstrates a preference for historical fiction and/0r gritty subject matter. These books may have moments of humour, but they are by no means funny books.Humour is exceedingly difficult to pull off, especially for children. When done right, it speaks to them in a way that no other style does. Kids need funny, they crave it. Shouldn’t we recognize those skilled authors who can pull it off?

Nielsen is by no means stranger to awards, as her previous work has scooped up numerous nominations (and a few wins), mostly in children’s choice award categories. Again, here is the discrepancy between child friendly and awards- friendly. A few authors manage to bridge this gap but most end up being one or the other. The Reluctant Journal of Henry K. Larsen may be about the aftermath of a murder-suicide, but it is a deeply funny book. I hope that this year awards committees give Nielsen the literary cred she deserves.

The Reluctant Journal of Henry K. Larsen is out now in hardcover from Tundra Books.

Vancouverites! Kidsbooks is throwing a launch party for Susin tonight, Thursday, Sept 20th, at 7pm. I am sad that I can’t be there, but am happy to live vicariously through all of you!