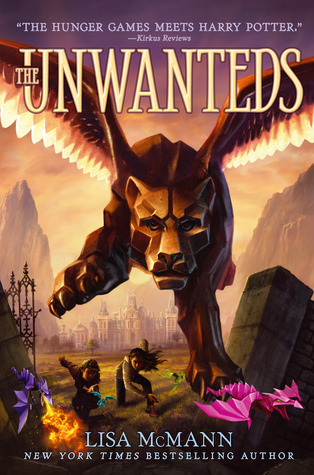 Kirkus reviews claims this series is “The Hunger Games Meets Harry Potter,” which is music to many readers (not to mention publisher’s) ears. A little more HP than HG, this was a cozy, delightful first novel in a series that brought me right back to my own middle grade years. Also, can we talk about that cover? This is a perfect cover; who does not want to read a book that features a flying cat statue prominently on the front?

In the bleak, totalitarian world of Quill thirteen year olds are deemed Wanted or Unwanted. Wanted children stay and learn at the prestigious university while Unwanted children are sent to their deaths at the Lake of Boiling Oil. So imagine their surprise when the Unwanted children arrive at a virtual paradise called Artimé where they are taught to hone their artistic and eventually magical skills. For the first time, Alex is free to develop his talent for art and make genuine friends. But Alex’s enjoyment of  Artimé is tainted by thought of his twin brother, Aaron, left alone in the repressive world of Quill. He risks everything to speak to him one last time, an action with irreparable consequences.

I loved the world of Artimé , which is a bookish child’s dream. A virtual paradise where creative arts and nurtured and encouraged. Like Hogwarts, this is a school of never-ending food, encouragement, and magical delights. Each of the children are given a tutor to help them nurture their specific talent (painting, acting, music). This instruction eventually includes magic, so what was once an accurate painting of a door actually BECOMES a door, or a soliloquy takes on the power of a spell. This is an engaging concept that middle grade readers will love and McMann is creative and innovative in this aspect of her world building.

The book lacked depth in some places and not enough time was spent developing some of the relationships (Alex and Lani’s relationship came out of nowhere and felt forced). This did not take away from my enjoyment of the book, but removes it from the ranks of richer literary fantasy, such as Harry Potter, Hunger Games, or The Peculiar. I’m curious to see what happens in the subsequent books. Gentle readers who like fantasy, magic, and animals will love this new series.

The Unwanteds is available now in paperback from Aladdin.