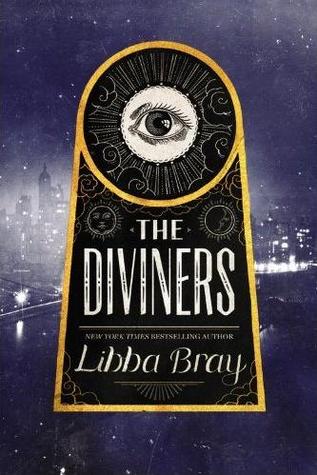 I never know what to expect when I pick up a Libba Bray novel, other than YA genius. Where content or style is concerned, there is very little in common between the Gemma Doyle trilogy, Going Bovine, Beauty Queens, and The Diviners. Bray has the ability to slip between styles like no other YA author. Although I loved Beauty Queens (read more about this weird and wonderful feminist novel here), the historical/magical world of Gemma Doyle is what captured my heart the most. Until I read her latest offering, The Diviners.

1920s New York City is buzzing with life, opportunity, and murder. A serial killer has struck, a mysterious man calling himself Naughty Jack, modeling his murders after an unusual scripture. We are introduced to a strange brew of characters, including the charming and devious Evie, a wannabe flapper with a strange gift for clairvoyance; handsome numbers-runner Memphis who will go to great lengths to protect his younger brother; Sam, a wise-cracking but handsome pickpocket; Theta, a glamourous but aloof follies girl running from her past, and many more.

I don’t know a single person who could walk by that cover and not be intrigued. It’s dark, gorgeous, mysterious, and evocative- just like the novel. Someone give that book designer an award! Bray fully immerses the reader into her world, not just painting a vivid portrait of NYC but also giving us glimpses inside the heads and lives of Naughty Jack’s victims. I don’t read much adult historical fiction or high fantasy because I don’t like getting bogged down in details, but Bray manages to be detailed without straying too far from the plot, which unfolds at the perfect pace. There were a few moments in the beginning in which the story felt unwieldy, as if there were too many disparate strains for Bray to effectively keep control of, but any concerns I had mostly dissipated by the end of the novel.

This book is mostly about Evie, a bratty, fame-hungry and self-centered social climber, who I found extremely annoying for the first 80 pages or so. I had some difficulty swallowing her constant stream of jazz-era slang, which may be in character, but I found distracting. Not enough that I wanted to put the book down, but even at the end, after she witnesses some horrible things and truly comes into her own as a far more palatable person, I still found Evie irritating. She was the most “stock-y” of the characters in this novel and I found myself wishing Bray would focus on some of the more interesting characters (Mable, Jericho, Theta).

What I appreciate the most in this novel is Bray’s ability to conclude what is clearly book one of a series in a satisfying way but still introduce enough questions that the reader is desperate for book two. I call these kind of books door-openers (instead of cliff hangers). A cliff hanger is such an easy way to entice a reader, but Bray is too smart for that. The major plot comes to a (seeming) conclusion, but some of the secondary characters (Memphis and Jericho) for example are set up to have bigger story-lines in book two. I ,for one, look forward to hearing more about the mysterious Jericho and his Frankenstein-ish past.

Fans of Bray (of which there are legions), The Name of the Star (Maureen Johnson), Strings Attached (Judy Blundell) and YA lovers of all ages will gobble this up. Anyone who enjoys books set in New York or during the jazz era will also appreciate the sense of time and place in the novel. The moody atmosphere and supernatural content screams fall, making The Diviners a truly satisfying post-Halloween read.

The Diviners is available now from Little Brown.

One thought on “All That Jazz: The Diviners Review”