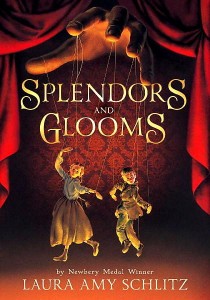 Be prepared- this review contains spoilers and incessant gushing.

A Drowned Maiden’s Hair remains one of my favourite contemporary middle grade books and I could not wait to read Schlitz’s next book Splendors and Glooms, which seemed perfectly Victorian and gothic and creepy. The wait was worthwhile, and this book has vaulted into my best books read in 2012 list (post coming soon!)

Clara Wintermute is lonely. After a cholera outbreak takes the lives of her four brothers and sisters, she is the sole child left in a sad, mourning household. But Clara is determined to have a good birthday, and so she begs her father to allow Gaspare Grisini to put on a puppet show for her guests. Clara is enchanted by the puppets, but also by the two children who work with the puppeteer, Lizzie Rose and Parsefall. She hopes to befriend them. Little do the three children know that Grisini has a dark past steeped in magic and horrors involving a curse and a series of kidnappings.

Set in London and Northern England in the 1860s, this is a masterful gothic fairytale from one of my favourite contemporary writers. Something about the tone and structure of this novel reminded me of  old-school fairytales, particularly The Snow Queen. It is dark in the same way fairytales are dark, which is to say there is an element of fantasy or disbelief employed that keeps the reader from crying throughout the whole book. We believe we are reading a fable and therefore we are affected but not traumatized by the story. There are many people who disagree with me, especially on Goodreads, where I made the mistake of browsing some of the reviews and came across a number of angry adult readers who found the book too disturbing for children.

Schlitz and I share a love of prickly protagonists. Maude (from A Drowned Maiden’s Hair) and Flory (from The Night Fairy) have a lot in common with Parsefall the pickpocket-turned-puppeteer. Orphans and fairies tend to be sympathetic, hard-done by, sweet characters, but not so in Schlitz’s work. All three of these characters are independent, selfish, conflicted, and damaged, but not so far-gone that they can’t experience transformation.I have a friend in social work who finds a lot of children’s literature frustrating because the protagonists seem untouched by the horrible and often traumatic situations they have to deal with (Harry Potter comes to mind. There is a kid who in the real world would need some serious therapy). I think she would appreciate Schlitz’ s work, which is more realistic in terms of the psychology of her troubled characters.

Parsefall, for example, is impulsive, selfish, and slow to trust others,  but his loyalty to Lizzie Rose and especially to Clara, when she is turned into a puppet, is touching. Lizzie Rose’s desire to be good no matter what is heartbreaking and inspiring.  The combination of complicated characters and truly striking prose is what makes Schlitz stand apart from the crowd.

This book has an interesting denouement, which is bit longer than most middle grade or even YA novels. It’s very spiritual and cleansing in a way, and Schlitz takes great pains to explain the actions of her villains, if not exonerate their guilt completely. The children’s goodness and forgiveness lightens the heavier aspects of the book and I finished the book with a sense of catharsis that happens to rare these days. A true masterpiece.

Splendors and Glooms is available now in hardcover from Candlewick Press, distributed by RandomHouse in Canada.