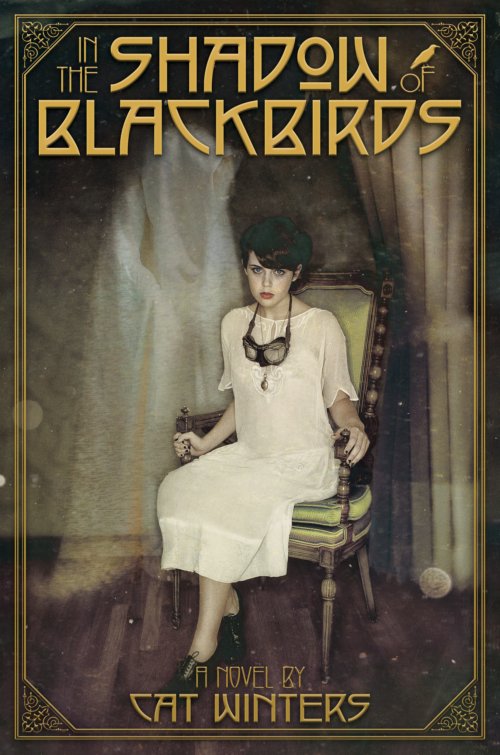 I am a sucker for all things Gothic. The Victorians may have had some weird ideas about things, but they certainly make for excellent fiction. Such is the case in this debut YA novel, In The Shadow Of Blackbirds, which lacked a little in richness and depth but nevertheless was a compelling and original story.

It’s 1918 and the United States is at war with Germany and in the grip of the Spanish Flu. Mary Shelley is sent to live with her aunt in San Francisco after her father is accused of being a traitor and her mother dies. There, Mary learns that her childhood friend and sweetheart Stephen has been killed in action. But Stephen appears at her bedside every night, screaming about blackbirds and covered in blood. A woman of science, Mary doesn’t believe in spirits but she cannot deny Stephen’s presence. Why is he haunting her? Is he caught between worlds, or is there something about his death he wants her to know?

I first picked this book up because I liked the setting of San Francisco at the tail end of WWI and in the throes of the Spanish Flu. It is easy to forget that this flu killed 20 million people world wide. Some estimates are as high as 100 million. Author Cat Winters does a great job re-creating this era of uncertainty, death, and superstition. Much research has gone into the odd remedies people used to ward off the flu, including wearing necklaces of garlic and burying themselves in onions.

This book unfolded like a traditional mystery and felt quite procedural at times, with Mary Shelley puzzling over clues, questioning possible suspects, and then arriving at the scene of crime only to have the perpetrators appear, confess, and threaten her own life. Cat Winters‘ writing style is brisk and well-paced and the book was extremely visual. At times I wanted her to flesh out the secondary characters a bit more. Particularly Aunt Eva, who felt under-developed to me.

This is a moody book, full of nightmares, a ghost suffering from shell shock, desperate people and illness. What happens to Stephen is truly horrible, but their is relief at the end when Mary Shelley is able to help him rest and she herself goes forth to do good in the world. A great read for fans of gothic fiction such as This Dark Endeavour, Masque of the Red Death, The Madman’s Daughter and The Diviners.

In The Shadow of Blackbirds is available now in hardcover from Amulet Books.