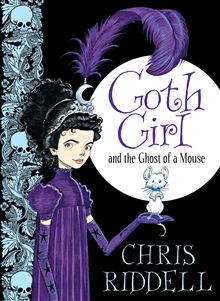 There are ghost stories and there are mouse stories, but to my knowledge Goth Girl and the Ghost of a Mouse is the first book to weave both together and boy is it a charmer! One of our favourite gems at the Flying Dragon Bookshop was the Ottoline series by UK National treasure, Chris Riddell. These deluxe little hardbacks are a marvel of design; gilding on the covers, gorgeous full-colour endpages, clever illustrations throughout, and a little something extra at the end (postcards, Bog goggles, etc). The stories were warm and funny and original. I was overjoyed when Goth Girl and the Ghost of a Mouse came to my attention. Present are my favourite Riddell highlights; glorious silver foiled endpaged, a mouse-sized(full colour) copy of Ishamel’s memoirs (in rhyme, no less!), purple tipped pages.

Ada is the only daughter of moody poet Lord Goth, who avoids his daughter because she reminds him too much of his beloved late wife. Ada is left to her own devices in the mansion, which is home to many kindly ghosts,  including Ishmael, a former sea-faring mouse who died before he could publish his memoirs. It is a lonely existence, until Ada meets meets siblings Emily (a painter) and William (who suffers from a rare condition called Chameleon syndrome which allows him to blend into any setting) who introduce her to a whole new circle of friends, the children of servants who call themselves The Attic Club. It is these new friends who she draws on for help when it becomes clear that the nefarious in-door gamekeeper Maltravers has invited a group of mythical creatures to Ghastly Gorm-Hall under false pretenses. The eclectic group (including a Siren, harpies, centaurs, etc) believes they have been invited as guests of honour at Lord Goth’s Annual Metaphorical Bicycle Race and Indoor Hunt, when in fact they are to be the creatures hunted.

The detail in this book (in terms of story, illustration and design) is extraordinary. This is the perfect example of book as lovely object and represents the kind of experience an e-book simply cannot re-create. There are lots of cheeky nods to Victorian writers and English pop culture in general, for example the chimney caretaker Van Dyke who runs away with one of Ada’s many governesses, Hebe Poppins, or the female novelist Mary Shellfish. Despite these nods to a more adult audience, Riddell never loses his light sense of humour and observations about friendship and loneliness. Reading Riddell, you get the sense that he genuinely likes and understands children.

Fans of Ottoline, Eva Ibbotson’s younger work (such as The Beasts of Clawstone Castle) and MaryRose Wood’s wonderful and under-appreciated Incorrigible Children series will love Ada and friends. Goth Girl and the Ghost of a Mouse received the 2013 Costa Children’s Book Award for being “wonderful, charming, delightful and inventive.” I could not agree more and am eagerly awaiting the sequel, Goth Girl and and the Fete Worse Than Death. Fete! Ha! I’m already laughing!

Goth Girl and the Ghost of a Mouse is available now from Pan-Macmillan; Harper Collins in Canada.