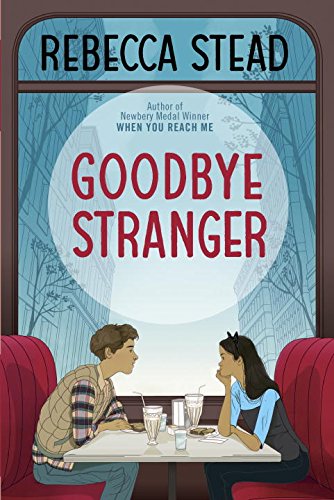 A Rebecca Stead book is always unexpected and always a delight. I very much enjoyed her Northern fantasy First Light and remember hand-selling the heck out of it to die-hard City of Ember fans in my bookseller days. Then I read When You Reach Me and was struck by how timeless it felt, despite being very rooted in a time & place. Liar & Spy was a quieter character study, very much setting up the reader for the meditation on friendship and contemporary adolescence that is Goodbye Stranger.

My favourite Judy Blume novel is Just As Long As We’re Together, which is essentially about girls navigating the politics of being a trio of best friends. In a way, Goodbye Stranger is a post modern meditation on Just As Long As We’re Together, exploring a spectrum of relationships, from downright cruel to occasionally toxic to fair-weathered to remarkably strong. It sounds unbelievable to say that Stead touches on all the questions of adolescence in one novel (friendships, first romance,  changing relationships to parents, finding your tribe, identity), but not only does she manage it, she does it so deftly it left me stunned and unable to pick up another book for days.

There are essentially three story lines about friendship that overlap- though the plot told entirely in second person feels relatively separate until all is revealed in the end. Bridge, Tab and Emily represent the healthiest possible kind of friendship. Even when dealing with little betrayals they stick to their promise of no fighting and when they DO argue, it is remarkably mature if not a touch idealistic. This is contrasted by a second-person anonymous storyline chronicling the ups and downs in another group of girls that is heartbreaking and at a times chilling (THE CINNAMON)!)

This is also a book about the first stirrings of romantic relationships. Much of the narrative is taken up with a photo Em sends to her maybe-boyfriend that is seen by a group of boys and eventually the whole school, threatening her reputation.  Stead handles this murky and topical scenario carefully and dare I say gently, addressing the issue and its implications but choosing for the best-case scenario. To me this makes perfect sense for the age group, some of whom will be scared silly by the idea of sending a photo of themselves to a boy, and others who have already done so and may relate to the stinging repercussions.

While Em is getting into kissing and embracing her burgeoning sexuality Bridge is moving at her own slower pace with Sherm, who is the cutest of cute and quite possibly my favourite tween love interest since Thomas J in the movie My Girl*. Bridge and Sherm clearly have a mutual interest but neither is ready to take it past spending time together and conversation. Adults are terrified by the desires and awakening romantic appetites of tweens but the truth is that they exist and deserve to be addressed. I love that Stead has two characters of the same age in very different places, romantically speaking. But romantics are rewarded with a truly gorgeous epilogue that I will refrain from re-typing word-for-word except for the following sentence, my new favourite line about love:”Kissing Sherman was like saying “And. . .and. . .and. . .”

The book is not just about girl relationships. Bridge’s older brother Jamie is embroiled in a competitive and toxic friendship of his own with Alex, a frenemy who is bent on tricking Jamie out of his beloved possessions in a cat-and-mouse game involving a limited number of steps per day that seems rigged to make Jamie fail. Sherm, Bridge’s not-quite-love interest, is also present in a series of letters written to his absentee grandfather who he hasn’t quite forgiven for up and leaving him. There is much to be gleaned here about the complications of tween and teenage friendship, male or female.

I haven’t even mentioned Tab and her glorious indignation at injustice and her strong moral code, or the cat ears that Bridge has seemingly inexplicably started to wear and what they represent. This book is an embarrassment of riches and I don’t want to waste your time praising them here- go read it yourself! I will say there are coincidences and twists of fate one has come to expect from a Stead novel and the uncanny dialogue that feels not only authentic but also transcends time and place to feel timeless, like dialogue in a play. This book begs for multiple readings and each time the reader will come away with new insights and a deeper appreciation for Stead as a middle grade magician.

Goodbye Stranger has vaulted into my all-time top ten and I can’t recommend it enough. Rebecca Stead is now the Golden Standard that I personally aspire to as a middle grade writer and belongs in the ranks of Madeline L’Engle, Judy Blume and E. L. Konigsburg. Give this book to a tween in your life and take a peek yourself to get a glimpse of the complicated world contemporary tweens are navigating which is perhaps not so different from what you experienced, but likely has not been so deftly or eloquently expressed as by Stead.

*For  proof of my undying love for Thomas J and his impact on my own writing, please see Benji in my books Words That Start With B; Love is a Four-Letter Word and Days That End in Y